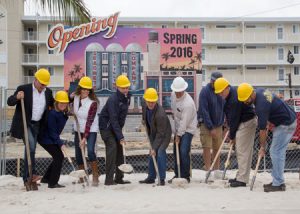 OCEAN CITY, MD – Local and state officials joined investment and development partners to celebrate the ground breaking of the Seacrets Distillery – Maryland’s first limited-licensed distillery that is part of a food and beverage establishment.

Founder of Seacrets Leighton Moore kicked off the ceremony by thanking all that have contributed to the development of the new distillery. “Breaking ground on the distillery is huge. It’s the first one in the state and we had a big hurdle to get over in making this a reality, but we did it.”

Delegate Mary Beth Carozza has been a major supporter of the distillery at Seacrets and spoke about the impact this development will have on the community. “I’m proud [this] was one of my first bills – an economic development bill right here for Ocean City”

In addition to bringing jobs to Worcester County, the distillery is hoped to be a large attraction to the town of Ocean City with guided tours of the distillery offered daily.

The distillery will be two stories, with a third floor used for climate control and grain storage. The distilling operation will take place on the first floor, including a mashing tank, five fermentation tanks and stills. With the mashing and fermentation tanks reaching 20 feet tall, a mezzanine will serve as the second floor where a tasting room and gift shop will also be located.

The exterior esthetics of the building will be made of brick, exposed steel and the face of the building consisting of mostly glass, allowing for the public to view the operation from the outside.  The total square footage of the new distillery will be 12,000 square feet and will reach 72 feet at it’s highest point.

Seacrets launched its new line of craft distilled spirits in May 2014, which now includes spiced rum, blood orange vodka, coconut rum, white rum, vodka and gin under its own label – Seacrets Spirits.  Seacrets Spirits products are produce served as the “house pour” at Seacrets Bar & Restaurant and are sold in liquor stores and served in bars & restaurants throughout Maryland, Delaware and Washington D.C.