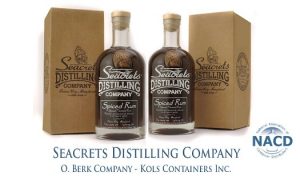 The unique keepsake bottle features the Seacrets embossed logo overprinted with screen printing A copper colored metal medallion of the Seacrets pirate ship lends a distinctive and recognizable element to the packaging. Just in Time fulfillment ensures the bottles are labeled with individual SKU information prior to digital label application, customized to reflect each of the 10 flavors in the product line. A custom box featuring coordinating graphics is also supplied for single bottle servings as a gift carton for customer sales at the Seacrets Distillery.

A unique collaborative effort between O.Berk and Piramal Glass produced exactly what Seacrets Distilling envisioned in its product packaging. Once the packaging design was conquered in 2-D on paper, O.Berk stepped up to create the potential keepsake with twenty-first century technology. They provided true-to-life 3-D printed models, allowing for test reaction to the design before committing to production.

The Annual NACD Packaging Awards program recognizes the most innovative packages released during the previous year from a wide array of public and private companies of various sizes and geographic regions. More than 200 entries were received for the 2017 NACD Packaging Awards. The Best of Show Award is named in memory of Bernard M. Seid, a valuable contributor to NACD and innovator in the development of the Packaging Awards Program. Winners for all categories will be announced at the Annual Meeting on April 27, 2017 in Napa, CA.

Erected in 2016, Seacrets Distilling Company marks a milestone for the town of Ocean City, MD as the first distillery to be built in Worcester County since the end of Prohibition in 1933. Seacrets Spiced Rum is a part of a premium line of handcrafted spirits, also including White Rum, Coconut Rum, Vodka, Gin, Orange Vodka, Ruby Red Grapefruit Vodka, Lemon Drop Vodka, American Whiskey and Bourbon Whiskey. The full Seacrets Spirits line is available for sale at the Seacrets Distillery and many other retail locations throughout Maryland and Washington D.C. Expansion of the brand into surrounding mid-Atlantic states is expected in the near future.