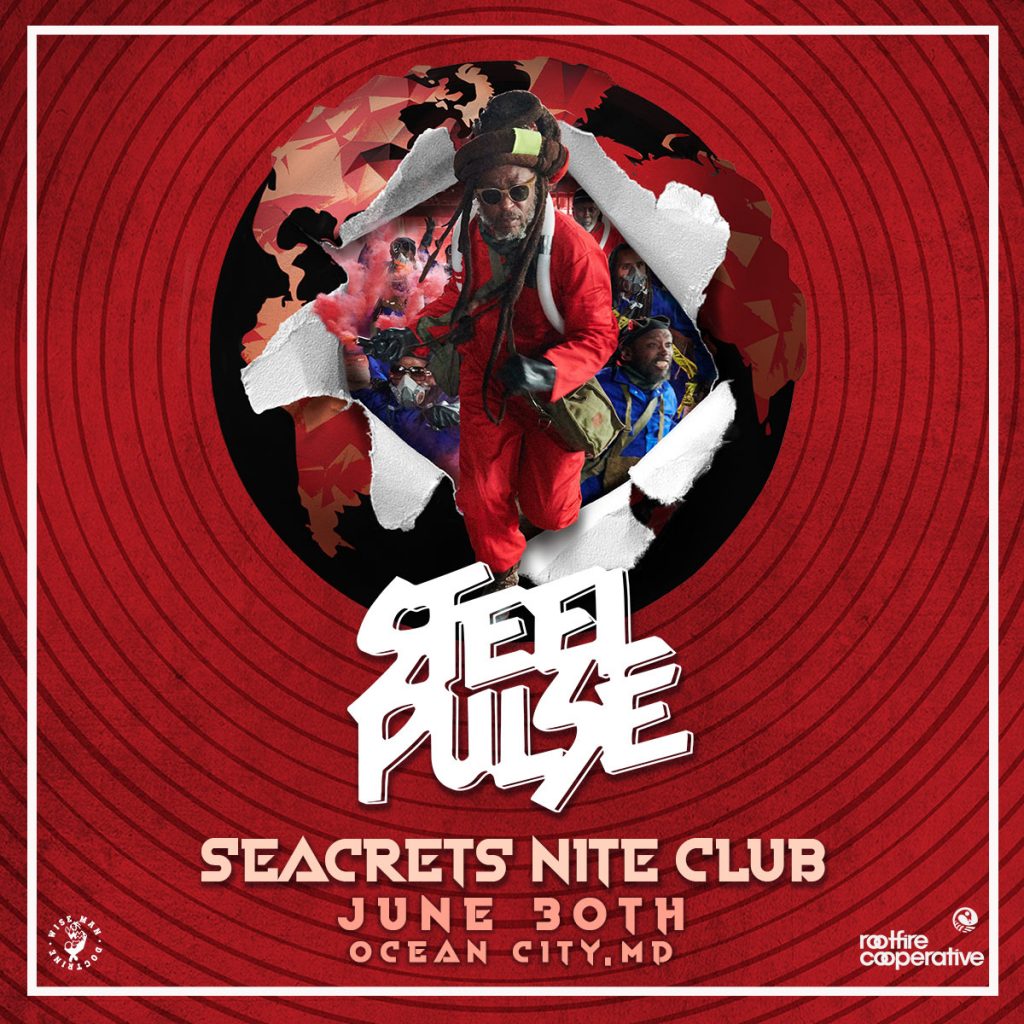 Bearing witness to the accelerating negativity of global affairs, Steel Pulse emerges with musical vengeance to halt the disarray of humanity. The bands twelfth studio production, titled Mass Manipulation, reflects four decades committed to bettering mankind through music. Steel Pulse continues to be revolutionary in engaging controversial topics of racial injustice and human rights on a global scale. Their musical stance and conceptualizations are as potent and relevant today as they were at the beginning of their career. The album’s uniquely thematic approach provokes thought as it presses forward, toward humanities unification. A manipulation of our minds has been influenced by a New World Order currently dominating humankind. Steel Pulse reappears at a fated moment, armed with compassion, encouraging all people to reject false ideals, set higher goals, and demand more from themselves to further this unification.

Lead singer and guitarist, David Hinds’ creativity, human persona, and visionary views are revealed through inspiring compositions that capture the effects of the African Diaspora. These songs weave and interlock with each other, enticing all to stand together and unite.

The album begins with a continuation of past struggles in attaining freedom. From the opening song, “Rize,” one can hear, feel, and be uplifted through urgency established in its cadence. This urgency compels participation in the Windrush generation’s cause to rise against evil and controlling forces.  Ancient melodies paired with catchy lyrics in “Stop You Coming and Come” transport the mind to a period of time where secrets of an African dynasty are unmasked. “Thank The Rebels” follows as a classic Steel Pulse anthem with powerful messages of awareness and inspiration. From the opening trumpet call, Hinds picks up the torch of wisdom, rallying humanity toward great aspirations. In “Justice in Jena,” rolling drums and repeated chorus structure highlight the hatred and racial intolerance that persists, despite the notion that society has progressed into a post-racial world. Haunting organs and eerie guitar interplay in “Human Trafficking” emulate the atrocities of this underground world, while desperate drumming and frantic horns bolster an emotional plea to admonish this horror.

Mass Manipulation evolves and sets to navigate the political transformation of changing social and economic environments. Impassioned vocals convey the pain and suffering experienced throughout “Cry Cry Blood.”  This song features blistering horns to help settle the nerves and uneasiness felt. “No Satan Side” follows with its intoxicating tempo, rhythmic chanting, and riveting lyrics, defining the African Diaspora with redemption cries for, “Rastafari and live.” “N.A.T.T.Y (Natural And True To Yourself)” explodes with syncopated drumming and purposeful bass to unburden the soul. It is here where we find Hinds at his most personal and reflective state. The album’s title track, “Mass Manipulation,” positions exploding horns to drive home its warning, bursting the corporate glass which would serve to protect the deceitful and corrupt. In “World Gone Mad,” a jolting rap broadcasts the horrifying consequences of madness.  Ensnaring drums and seducing bass encapture those evil and controlling powers embodied in “Black and White Oppressors,” while defiant lyrics, weaponized with energetic horns, serve to penetrate Babylon’s evil and systematic ways.

The album comes full circle as Steel Pulse’s legendary musical abilities aim to achieve a greater community for all. The promise of mankind’s salvation is prominently positioned with vocals offered to still calm in “The Final Call.” Stunning harmonica jousts invoke inward reflection and set free courage to conquer. “Higher Love (Rasta Love),” a beautiful Hinds reggae reinterpretation of Steve Winwood’s “Higher Love,” exudes charisma and energy hailing for love across humanity.  The album crowns with “Nations of the World.” Stabilizing lyrics, enforced by a commanding rhythm, beg freedom fighters, leaders, and citizens from all nations to come together in peace.

In the midst of today’s strife and turmoil, Mass Manipulation is Steel Pulse’s indispensable musical gift, as their forty year legacy continues to define the magnificent power and beauty of reggae music. As reggae revolutionaries, Steel Pulse is revered by the younger generation of artists and remains a powerhouse on stages around the globe. Through the example of Mass Manipulation, Steel Pulse demonstrates the endless possibilities that come from breaking down the walls of systemic greed and nurturing the fellowship of mankind.